This is the second part of my post about “exploring OmniOS in a VM”. The first post showed my adventures with service and user management on a fresh installation. My initial goal was to make the system let me ssh into it: Now the SSH daemon is listening and I’ve created an unprivileged user. So the only thing still missing is bringing up the network to connect to the system from outside.

Networking can be complicated, but I have rather modest requirements here (make use of DHCP) – so that should not be too much of a problem, right? The basics are pretty much the same on all Unices that I’ve come across so far (even if Linux is moving away from ifconfig with their strange ip utility). I was curious to see how the Solaris-derived systems call the NIC – but it probably couldn’t be any worse than enp2s0 or something that is common with Linux these days…

Huh? Only two entries for lo0 (IPv4 and v6)? Strange! First thought: Could it be that the type of NIC emulated by VirtualBox is not supported? I looked for that info on the net – and the opposite is true: The default VirtualBox NIC (Intel PRO/1000) is supported, the older models that VBox offers aren’t! 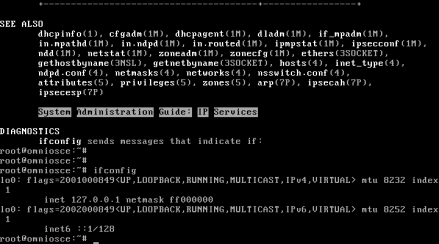 Ifconfig output and fragment of the corresponding man page

Obviously it’s time again to dig into manpages. Fortunately there’s a long SEE ALSO section again with ifconfig(1M). And I’ve already learned something so far: *adm commands are a good candidate to be read first. Cfgadm doesn’t seem to be what I’m looking for, but dladm looks promising – the short description reads: “Administer data links”.

I must say that I like the way the parameters are named. No cryptic and hard to remember stuff here that makes you wonder what it actually means. Parameters like “show-phys” and “show-link” immediately give you an idea of what they do. And I’m pretty sure: With a little bit of practice it will work out well to guess parameters that you’ve not come across, yet. Nice!

Ok, there we have the interface name: e1000g0. I don’t want to create bridges, bond together NICs or anything, so I’m done with this tool. But what to do with that information?

The ifconfig manpage mentions the command ipadm – but it’s kind of hidden in the long text. For whatever reason it’s missing in SEE ALSO! I’d definitely suggest that it’d be added, too. More often than not people don’t have the time to really read through a long manpage (or are not as curious about a new system as I am and thus don’t feel like reading more than they have to). But anyways. 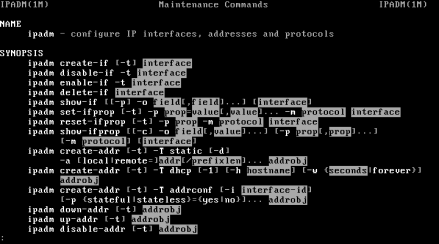 This should attach the driver and create the actual interface. And yes, now ifconfig can show it: 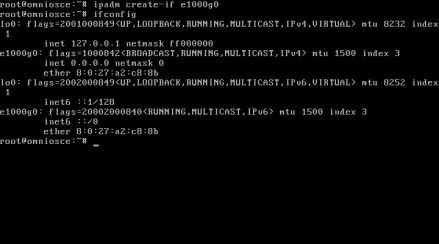 Almost there! Now the interface needs an IP address. Looks like ipadm is the right tool for this job as well. I had some trouble to find out what an interface-id is, though. The manpage obviously assumes the reader is familiar with that term, which was not the case with me. I tried to find out more about it, but was unable to locate any useful info in other manpages. So I resorted to the OmniOS wiki again and that helped (it seems that you can actually choose almost anything as an Interface ID but there are certain conventions). Ok, let’s try it out and see if it works:

No error or anything, so now the system should have acquired an IPv4 address.

Ok, looks like we don’t have name resolution, yet. Is the right nameserver configured?

Oops. There’s something not right here! If I configure my FreeBSD box to use DHCP that makes sure resolv.conf is populated properly. The interface e1000g0 got an IP – so the DHCP request must have been successful. But did something break before the network was configured completely? Is the DHCP client daemon even running?

Hm! I’m used to dhclient, but dhcpagent is unknown to me. According to the manpage, it’s the DHCP client daemon, so that must be what OmniOS uses to initiate and renew DHCP requests. And obviously it’s running. However the manpage solves the mystery:

Aside from the IP address, and for IPv4 alone, the netmask, broadcast address, and the default router, the agent does not directly configure the workstation, but instead acts as a database which may be interrogated by other programs, and in particular by dhcpinfo(1).

Ah-ha! So I have to configure things like DNS myself. Nevertheless the system should have received the correct nameserver IP. Let’s see if we can actually get it via the dhcpinfo command that I’ve just learned about. A look at the manpage as well as at the DHCP inittab later I know how to ask for that information: 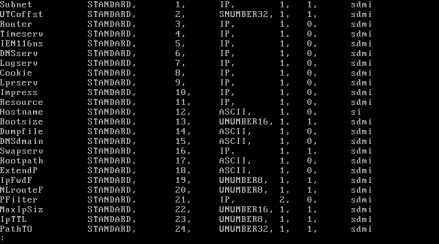 Looks good and things should work. One more test:

Alright, then it’s probably not a network issue… But what could it be?

Eventually I found another hint at the wiki. Looks like by default OmniOS has a very… well, old-school setting when it comes to sources for name resolution: Only the /etc/hosts is used by default! I haven’t messed with nsswitch.conf for quite a while, but in this case it’s the solution to this little mystery.

There are a couple of example configurations that can be used, though:

Copying nsswitch.dns over nsswitch.conf should fix that problem.

And really: Instead of getting a ping: unknown host elderlinux.org now I get no answer from elderlinux.org – which is OK, since my nameserver doesn’t answer ping requests.

Now with the network set up correctly, it’s finally time to connect to the VM remotely. To be able to do so, I configure VirtualBox to forward port 22 of the VM to port 10022 on the host machine. And then it’s time to try to connect – and yes, it works!

SSHing into the OmniOS VM… finally!

So much for my first adventure with OmniOS. I had quite a few difficulties to overcome even in this very simple scenario of just SSHing into the VM. But what could have been a trivial task proved to be rather educational. And being a curious person, I actually enjoyed it.

I’ll take a break from the Illumos universe for now, but I definitely plan to visit OmniOS again. Then I’ll do an installation on real hardware and plan to take a look at package management and other areas. Hope you enjoyed reading these articles, too!