Part 1 of this article series was about why you want to build your own router, and how to assemble the APU2 that I chose as the hardware to build this on. Part 2 gave some Unix history and explained what a serial console is.

In this post we will prepare a USB memstick to update the BIOS and connect to the APU2 using the serial console. Then we’ll flash the latest firmware on there.

In the ol’ days you would simply connect the COM port on one machine to the COM port on the other. Today a lot of newer laptops don’t even have a serial port (if yours still has one of those funny devices that you’d access through /dev/fd0, chances are pretty high though, that it also has a COM port!). Fortunately USB to serial adapter cables exist, solving that problem.

The APU2 has a male DB9 (9 pins) serial port. RS-232 is the common standard for serial communication. According to it, some pins are used to transfer information while others are used to receive information. Now if you connect two machines with a straight serial cable, both will talk on the same pins and listen on the same pins. So both will send data over pins that nobody listens on and never receive anything on the other pins. This is not really useful. To make the connection work, you need a crossed-over cable (a so-called null modem cable or adapter). This means that the receiving pins on one end are paired with transmitting pins on the other end and vice versa.

I thought that I would never need a nullmodem cable at home. I still don’t think that I might ever need a straight serial cable. And I could in fact take one home from work and return it the other day. However I could already see what would have happened in that case: When I get some time to tinker with my APU it will be on the weekend and I won’t have the cable in reach when I need it. So I got my own. And while I was at it, I decided to not only get a USB to RS-232 DB9 serial adapter cable (look for the PL2303 chipset translating USB to serial: It’s well supported across a wide range of operating systems including FreeBSD). I also bought a null modem adapter and a gender changer. So now I’m completely flexible with my gear. However you probably just want to get a null modem cable USB/female DB9 (or ask somebody who has one if you could borrow it).

Another thing that you have to know is the baud rate (modulation rate) for your connection. A higher baud rate means a faster connection. As long as both connected machines agree on the baud rate, everything is fine. If they disagree, this can lead to displaying garbage instead of the actual console or in seemingly nothing happening at all.

To flash or not to flash

At the time of this writing, PC Engines have released 5 updates for the APU2’s firmware and if you like the improvements, it makes sense to put the newest version on there. They recommend booting TinyCore Linux and then using flashrom to flash the BIOS.

Flashrom is available for FreeBSD, too. I would imagine that it works as well. However I have no experience with that and flashing stuff always bears the risk of bricking your device (for which case PC Engines offers a small rescue device). If I had thought about this right at the beginning, I would probably have tried it out. But my APU2 is already updated and since this post is public and not just for me… Well, let’s just do this by the book and use Linux for that.

If you’re a little anxious and don’t feel well about flashing at all, leave it be; in general the old BIOS will do, too. Flashing according to a guide does not have a high risk of bricking your device but even a small risk is a risk. Disclaimer: You decide. And it’s all your responsibility, of course.

Alright, we need to prepare a USB stick with TinyCore and the ROM on it. PC Engines even offer a howto guide showing how to create this using FreeBSD. That guide works, but it clearly shows that those guys know Linux a lot better than (modern) FreeBSD. For that reason I’m going to modify it slightly here and use today’s tools.

First we’re going to download the TinyCore tarball and the zipped ROM (you might want to take a look if a newer version than shown here is out) and install the syslinux package (containing the that Linux bootloader):

Now attach your USB memstick to the system and after a couple of seconds look at the dmesg if you don’t know what device it will be attached to:

So for me it’s da0 in this case and I need to supplement the “X” that I use in the following commands with “0”. You should use whatever number you figured out. PC Engine’s howto suggests zeroing out the stick and if it isn’t a new and unused one that makes sense. In my case this leads to an error:

Looks like this is because GhostBSD automatically mounted da0s1 when it found an EXT2 filesystem from a previous task in there. So let’s unmount that and try again:

Depending on the speed and size of your memstick (and the generation of your USB port) this can take quite some time to finish. And since dd normally is working quietly, you might want to know how far it came so far. Fortunately FreeBSD implements the SIGINFO signal. Just press CTRL+T while it is running and it print some status information like this:

When it’s done, we can create an MBR partitioning scheme on the now empty stick as well as an MBR partition and write the bootcode on the stick so that we can boot off of it at all:

The next thing to do is putting a FAT32 filesystem on the partition and force install the Syslinux bootloader there that will be chainloaded by the bootcode that we wrote into the MBR.

Now we need to mount the new filesystem and put the OS on there:

We’re writing to a FAT filesystem – and as the primary filesystem from a once popular single user OS it does simply not support concepts like file ownership. That’s why we need “–no-same-owner” here (otherwise we’d see harmless but unnecessary warnings). As the next step we’ll add the ROM image and check its integrity – we don’t want to flash garbage on our APU and brick it, do we?

Make sure that the last command outputs 1 (in which case the calculated md5 hash matches)! If it does not, delete the zip file, download it again and extract it over the corrupt ROM file. Finally sync the filesystem, unmount it and remove the USB stick:

The memstick is ready. If you want to test it, boot some other PC or laptop from it. If you can read the line “Booting the kernel” and then nothing seems to happen anymore, it means that it’s working. TinyCore is configured to use the serial console, that’s why you don’t see anything on your screen and your keyboard doesn’t do anything after that. Just turn your computer off and plug the USB stick out.

Attaching the serial console and flashing the BIOS

Alright, back to the APU2 (finally). Put the memstick into one of the USB ports and attach your serial cable to the COM port. Now connect the other end of the null modem cable with another computer running FreeBSD (or Linux or whatever – this should all work, you’ll just have to figure out how to connect to a serial console on your OS).

Open a terminal, become root and attach the serial console (cuaU0 is the USB to serial adapter, 115,200 the baud rate):

Now connect the APU2 to power and see what happens! If you don’t do anything, the BIOS should load TinyCore from the memstick after a couple of seconds:

Connected to the serial console – and booting Linux

If nothing happens, you might have the wrong cable (is it really crossed-over?). Or maybe you’ve mistyped the baud rate? The “Connected” by the way only means that your host system has attached to the serial cable. You’ll get that message even when the other end is not connected to anything or the machine at the other end is turned off.

Once Linux was loaded, use flashrom to update the APU’s firmware like PC Engines show in their howto. Then reboot.

Preparing to flash the BIOS

The APU2’s BIOS supports the serial console. That means that even before the machine has booted an operating system with serial console capability, you can access and configure the BIOS of the headless machine: 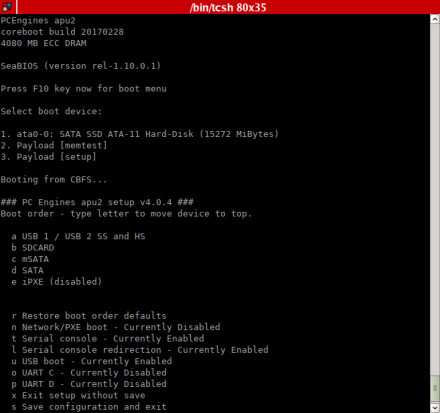 Another nice thing that comes with the APU is the Memtest program. If you want to know whether your new hardware is actually good or might probably have bad ram, put it to the test for a couple of hours or over night: 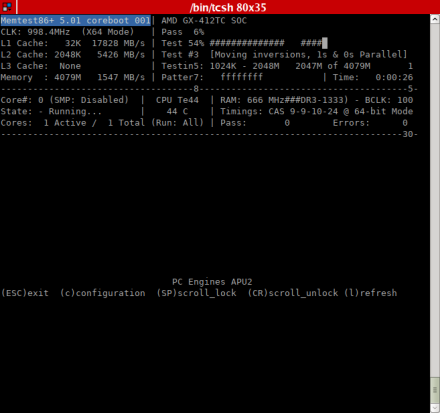 The firmware comes with Memtest

If you’re using cu as in my example, you can close the serial connection using the character sequence ~. (tilde and dot).

You now know how to access your box using the serial console. Next time we’ll make use of that skill again to put pfSense as the first of two options on the APU. The other option is OPNsense which will be covered in a later post. Both are FreeBSD-based router/firewall operating systems.