This post is about keyboards, keyboard layouts and… ergonomics. No surprise here if you’ve read the title! But how come that I write about such a topic? Well, I’ve invested some of the money I got from my family for Christmas and bought a new keyboard. I was a bit skeptical at first because I’d really regret having spent my money on it if it wasn’t really good (as it hasn’t exactly been a cheap one). However just days later I begun asking myself how I could have ever typed with something else. And after a few more days all that I do regret is the fact that I’ve typed for way more than 20 years on more or less conventional keyboards!

Yes, I’ve been going on a lot of people’s nerves praising my new gem. So I figured that I might as well complete the circle and publish my pean here on the blog, too! (Ok, the more serious reason is that I’m suffering from severe pain in my hands like many people who type a lot and that I’d like to talk about today’s possibilities to avoid this.)

This first part deals with a few general things about keyboards and the problems that typists often have. The second part will be about optimizing your typing with alternate layouts and the actual review of my new keyboard.

Edit (03/01/2015): I’ve finally managed to add the pictures that I wanted to have in the article right from the beginning…

Any keyboard does the job, right?

If all you want is to play computer games or enter your password when you log in – probably yes. Even though it’s funny that there are “gaming keyboards” which can also be rather costly. But that’s a very different case and story.

For simple things every keyboard suffices. I own an old laptop that I still use sometimes just for the very reason that I can. Its keyboard misses some keys which makes it not all too pleasant to type on. But still it’s possible. Honestly: I have no clue how many keyboards I’ve had over the years that had some keys no longer working or no longer work properly. May it be due to Cola making some keys stick together or a worn off space bar which would only trigger if you pressed it with a considerable amount of force.

I used to retire those keyboards from daily use (simply because they were annoying to work with) but usually kept them somewhere – just in case. You never know if you’d ever need them again, do you? Eventually I got rid of them. But in fact I actually did have a use for them a few times now and then!

So I can say that I’ve had quite a few keyboards in my life and that probably anyone does the job – depending on what that job is!

A matter of taste

There are a lot of different keyboards out there and in many aspects it really is a matter of taste. Some people like black keyboards while others want a white one. There are people who think it’s cool if the keys have background light. Some prefer the flat keys which you often find on laptops these days – others hate them. While many people like keys which do not need much force to be pressed, there are also those that prefer the opposite. Often I hear that somebody would never again purchase a wired keyboard but I know at least as many people who don’t like wireless ones.

It’s not hard to see that there just cannot be one single “perfect” keyboard for everybody. People have different needs and this alone defeats the idea of one universal best keyboard. And as long as you don’t type a lot it probably remains just a matter of taste. However if you type on a daily base this may no longer be the case. Right: No matter how much you type, the color remains pretty irrelevant. But other characteristics are worth a closer look at.

But when are you “typing a lot”? If you can only type less than 30 WPM (words per minute) even if your life depends on it, you probably don’t qualify. Which of course doesn’t mean that you could not benefit from thinking about your keyboard again (everybody should try to get the right tool after all, right?). If you type faster than 40 words, you’ve clearly typed enough in your life to make it worthwhile thinking about how you type. Especially if you write “Eagle Finger” (“hunt and peck”) or use “your own system” as a whole lot of people do.

It’s perfectly sensible if people who barely type at all don’t bother to learn to touch-type. Unfortunately a surprisingly high amount of people who type regularly think the same. Why on earth to invest some time and effort that pays off hundredfold and thousandfold? Yeah, why? Just wait a minute – thousandfold? That’s a lot. And yes, I do mean it.

I had the luck to learn to touch-type properly when I was still at school. The hours that I needed for training were relatively few. After I knew where all the keys were (without looking), I just typed and typed and kept improving my skills while I was primarily doing other things. Even in a very pessimistic calculation the time that I saved thanks to proper typing by the end of the year was way more than the time I had “lost” by type training in the first place. Then it started to pay off and really saved me time for other things. And best of all: It still does and will continue to do so for all of my work life and probably beyond that.

Well, I’m the “typealot” kind of guy; I’ve been typing whole books into my pc at younger years because I can read texts written in Gothic type style (aka. black letter) pretty well – and being interested in history, I thought that preserving old writings which are no longer copyrighted was cool. So learning touch-typing has paid off more than thousandfold for me. Might be a bit less for the casual typist, but I cannot recommend learning to touch-type often enough. If you’re using a computer regularly (and chances are, since you are reading a blog like this!), invest that time. Unless you are an old guy who is already counting the days left to retirement pension, you will benefit from learning it.

When I talk to young people about Repetitive Strain Injury (RSI), Tenosynovitis or Carpal Tunnel Syndrome (CTS), they tend to dismiss it: “Ah, why should I of all people get this?”. I can fully understand that. Why? ’cause I’ve been young myself and used to think right the same then.

The rigid splint I’m wearing against the pain

As I grew older I begun taking these possibilities more serious – at least a bit. I had heard about those “ergonomic keyboards” that Microsoft was selling. More out of curiosity than of anything else I bought one of those “curved” things. Thinking of the conventional keyboard as the “normal” form, I found it strange at first. But I could type on it pretty well and it felt alright. It took me less than three days to adapt to the new keyboard and it was not too different from the conventional ones so that I had no problem typing on those, too.

I got more of these and used such keyboards for years. Not because the ergonomic design promised to protect my hands, but because I liked how it felt to type on it. Then I begun to suffer from Tenosynovitis. At first I just thought that I had a temporary problem with my right hand and that it would go away soon. It went away, yes. But it has been coming back again and again. Then I got it in the other hand as well. In the end there were only “better days” and worse ones. In the meantime I have a rigid splint that helps a bit but is also not very comfortable to wear the whole work day so I use it only on the bad days. 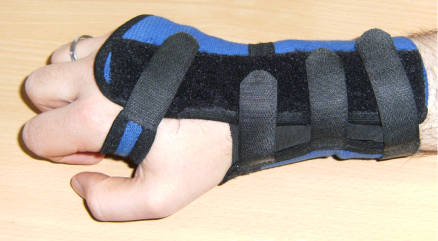 The rigid splint’s top side

So are those ergonomic keyboards a fraud? Mine didn’t save me from getting an injury after all! Well, I’m not really sure about the curved keyboard that I had in this regard. It might simply have happened even earlier on a conventional keyboard. But then there are even people who say that those keyboards are not any better than the ordinary ones. I wouldn’t go as far as that but they are probably far less effective than those marketing guys want you to believe. Still this would be the kind of keyboard that I’ll give to my children when they begin to type. Why? Because I think that it’s slightly better than the conventional form but still close enough to it so you can switch between them without much trouble (and let’s face it: There are simply far more ordinary keyboards out there!).

I switched to another ergonomic keyboard quite a while ago and learned an alternative layout. And finally I got what I consider a really great keyboard. That’s what I’ll blog about in the next post.