Today is the first day of my third blogging year. It’s hard to believe that it has been two years already but I checked the date of the first post: 06/24/2012. So it is really true. Two years are a long time and since the last birthday post a lot has happened again. For that reason I’m going to try to sum that up for you. And don’t worry: I’ll try to keep this birthday post shorter than the last one. 😉

I started the EERIE project because I wanted to really “get into Linux” instead of only using it. I didn’t know at all where that journey would take me when I set the initial goal to compare Linux desktops. In the first year it was mostly desktop centered posts that I wrote. Besides that I evaluated which Linux distribution would fit my needs, how a live cd is created, etc. In the last few months my interests shifted and wrote about other Unix-like systems as I begun exploring Linux’s “neighbors”.

What has happened in the last year?

In the second year I tried to get back on track and continue with the toolkit tests. But I was soon distracted from it and drawn towards different fields. The new focus clearly was package management, package building and the creation of a Linux distribution.

Since I was pretty confident that I would succeed in putting together an experimental light-weight Linux distribution, I registered a website for it. It has been severely neglected and not received any updates since October… Not having done anything with HTML for about 10 years, using a free template had been an obvious choice to begin with. In the mean time I invested a few hours to learn proper HTML 4.01 and some CSS but I have no idea when I get around to re-design the website. These things are moving forward very slowly.

A short series of posts dealt with the updating of an old Linux distribution where active maintenance had stopped several years ago. It was interesting to do and has been of interest for others, too, since I got a bit more of feedback on that topic.

The most important thing was two distributions that I created: An Arch-like distribution for i586 and one experimental one where I tried to build as many packages as possible using clang, an alternative init system, etc. Both worked quite well and while I never uploaded the i586 work, the other distribution was published as Arch:E5.

In addition to that I’ve got in contact with some nice people and interesting projects which is something I value greatly!

As you can see in the picture, the monthly visitors have increased in the second year over the first. In most months I had between 650 and 700 visitors. Exceptions were September with less than 600 hits and October with over 750. The blog has exceeded 10.000 total visitors clearly and features over 30 comments now.

While the wordpress “Trophy Case” is basically just play, I actually like it because it also shows the date of the day when the “medal” was “earned”. This makes the whole thing graphically polished statistics with some actual value. 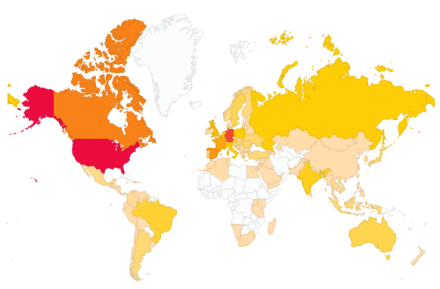 I’ve had visitors from 114 countries around the earth and thus the white parts on the map are getting fewer and fewer!

I’m having far less time for my computer projects compared to when I started the blog – and I think that really shows. In June I’ve had the lowest monthly hit count since more than one year (at least right now; the month isn’t over yet).

The reason for it is that I’m no longer studying at the university (which gave me enough free time). During the last year I’ve moved to another federal state, sought a job and moved again when I found one. And if my job (as well as the hours that I spend each day to get there and back home again) didn’t mean enough work and time lost, I’ve got even less spare time for another reason. For a positive reason fortunately: The birth of my second child!

So what does that mean? Currently it’s a bit hard to publish at least one new post each month but I’m not willing to retire yet! I just can’t make any promises on exactly what I’ll be able to write about in the forseeable future. Will it be toolkits again? The musl based Arch-like distribution? Some BSD things? Maybe a bit of everything or maybe something entirely different. Who knows? (I don’t!)